Gus is an adorable dog who has become a figurehead for homeless animals everywhere. He first stole the hearts of Houstonians when he was rescued in 2018 with life threatening injuries to his head and body. The most distinctive injury was the massive swelling in his face that was caused by a shoelace being tied around his neck. As Gus grew, the shoe lace became tighter and tighter across his skin until it began to constrict his airway. Because of this, Gus experienced a build up of fluid that was unable to leave the top part of his body. 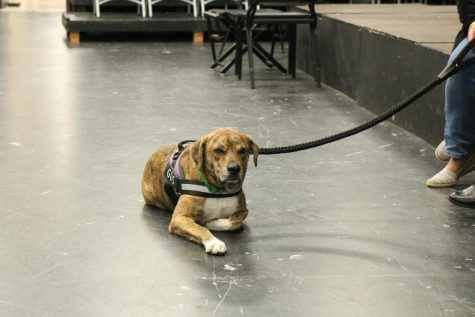 Gus lays on the floor in the black box while students listen to his story.

Gus arrived at Cypress Falls on Thursday and quickly captured the attention of many students and staff members who stopped in the Black Box after school to see him. In the Black Box, Sandee Roquemore Maxwell, author of children’s book “The Life of Gus,” as well as Gus’ owner, Anna Barbosa told us his story. 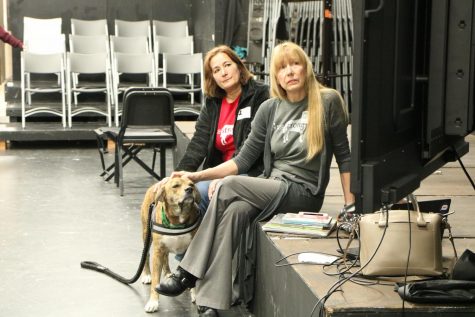 When a post on Facebook emerged with the caption, #Dead Dog Walking, it went viral, and Gus gained national fame. The next day, everyone was searching for the “Dead Dog Walking”. His rescuers, Tom Heller, Laura Forma and Rob Acuna found him that evening in Sunnyside, Houston. Once he was rescued, veterinarians said he looked to be about 10 months old. He had been living in an old, abandoned building in South Houston. When people finally found him, they slowly coaxed him out and transported him to a local veterinarian and eventually to doctors and Texas A&M University. There he underwent multiple complicated surgeries to restore facial tissue, much of which were dangerously close to his jugular artery and other crucial elements in his face. While conducting an X-Ray, animal doctors also found that he had been shot by a pellet gun approximately 27 times. Many people later said that they had seen the dog wandering around the Southside of Houston, but didn’t know what to do to help him. 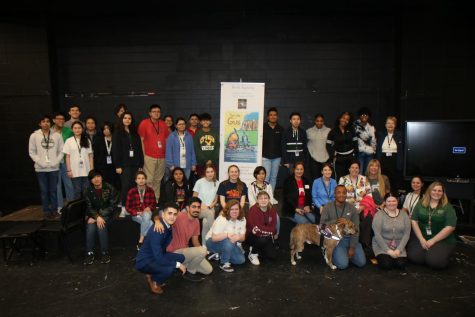 Students take a picture with Gus after they meet him.

Author Sandee Maxwell heard about his heartbreaking story and saw it as a chance to teach children everywhere a lesson.

“I want the kids to not ignore what they see and to not be bad to animals,”  Maxwell said. “A lot of the times people don’t know how bad the problem really is until they get out of their part of town.”

Gus is just one example of how we have helped animals. His journey could turn into a thousand stories for other animals with our help. He has taught the world about the cruelty and neglect that innocent animals have gone through and shown them that if we help rescue and provide warm, loving homes for them, we can make the world a better place one animal at a time.

You are going to

You are now leaving the CFISD website. CFISD is not responsible for the accuracy or content of any of the information provided by this site, nor is it liable for any direct or indirect technical or system issues arising out of your access to or use of third party technologies or programs available through this site. This site is not part of CFISD, and CFISD has no control over its content or availability.

Sorry, this site does not work properly without JavaScript enabled. Please enable JavaScript or contact your local administrator.